From climate perspective, one of the most important votes of the year in Europe just took place in Switzerland on 27th of Nov 2016. It was a referendum organized by the local environmental party, where they tried to force the early closure (after 45 years of operating) of the Swiss nuclear fleet and forbid any construction of any kind of nuclear in Switzerland ever.

It was just a few days ago when the polls on the matter predicted a narrow victory for the closures and nuclear ban. Had this happened, the repercussions would have been much worse than just the loss of the Swiss nuclear fleet. The result would have sent ripple effects all around the European Union and its members.

The anti-nuclear establishment would have used the result as some kind of proof against nuclear and would have started demanding loudly that other countries follow the Swiss example, or perhaps organize their own referendums on the matter (with Brexit we learned that those can go either way and there is no guarantee that the result will make any actual sense). We have heard it for years from the top Green party politicians here in Finland that we should follow the German example, even though it has proven itself to be disastrous for climate.

Had the result been the opposite, it would have perhaps destroyed the last hope for a sensible, pragmatic and proven energy- and climate policy here in Europe. It would have been a climate disaster if this policy of banning by law our proven and – with hydro power that has its geographical limits – most efficient climate mitigation tool had continued.

Energy for Humanity, of which Ecomodernist Society of Finland is a local chapter, has been campaigning for months on this. For them, it was victory through hard work. Our Society congratulates Energy for Humanity and their crew on the victory and thanks them wholeheartedly for their hard work. You made this happen.

Year 2016 has seen its share of national votes where fear-mongering and cheap populism has gained victory. We really needed this one.

The final result was: 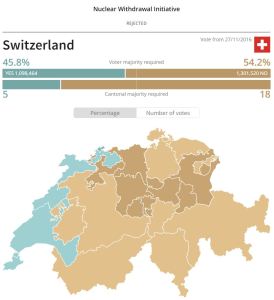